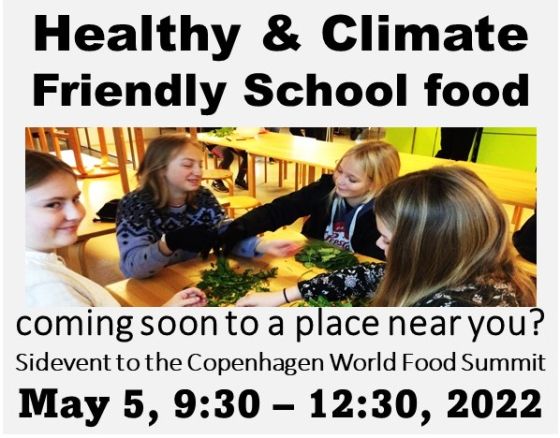 The webinar attracted 50 participants from around the world and demonstrated the huge interest that exists around in school food transition. With a majority of participants coming from the Nordic countries the school food cultures in Norway, Sweden & Denmark was the focus of the webinar.

The starting point of the webinar was an international overview by professor Donald Bundy that highlighted the huge global interest there is in using food at school as a driver for food systems change and the need for international cooperation. This need was underlined further in the talk by Ulrika Backlund on the new EU program SchoolFood4Change.

The Swedish case was presented by Tina Bowley and evolved around the long history of publicly provided Swedish school meals and giving recent examples of how innovation is taking place in the case of Malmö. The Swedish case acted as a backdrop for the Norwegian and Danish school food cases. Arnt Steffensen presented the first that evolved around the interest that exists in leaving the lunch box and replace it with publicly provided school food as part of the school day.

For the Danish case Lene Nørgaard Hansen and Mia Lundby Kragelund presented examples from the Tønder and Århus municipalities where local political action has been taken in the light of lack of a national school food policy. From the food provision perspective (“the canteen view”) the webinar went on taking a look at the “classroom view”) arguing that if school food should play a role in the long term transition of the food system then only passive feeding and provisioning will not do the job. It needs to go hand in hand with active learning.

Elin Sandström elaborated on the need for integration of the food agenda in curriculum and classroom activities using the Swedish Food Agency’s new project as the example. In the final talk Bent Egberg Mikkelsen presented the Danish SESAM program that has developed a classroom concept that integrate food systems transition thinking in the teaching of STEM and Computational Thinking.

The webinar was concluded with a discussion moderated by Vivian Barnekow and Lis Zacho. The discussion was informed by the insights from a small survey that was conducted among the webinar participants. The participants will continue to follow up on the topic in the Special Interest Group at Linked in.

Are we there yet? The 2nd largest city in Denmark has started its journey towards public school food provision, Mia Lundby Kragelund, Special Advisor, Municipality of Aarhus

Can School Food be a campaign theme in the local government elections? In Tønder, Southern Jutland, Denmark it could. Lene Nørgaard Hansen, deputy school director, Municipality of Tønder

Is there a lunch box shame in Norway? How a teacher & dietician alliance has been pushing school food forward. Arnt Steffensen, President, The Norwegian Diet and Nutrition Association.

From Canteens to Classrooms – food and empowerment of young people